The effects of smoking on your skin health

Over the years, multiple studies have been set forth to correlate smoking cigarette with dermatologic diseases and cancers. Because of these studies, dermatologists and other doctors can warn their patients of the role smoking plays in dermatology.

According to the article, Wahie and Lawrence conducted a study showing an increased rate of wound infection in smokers. Cigarette smoking has been shown numerous times to cause damaging effects to wounds that are in the healing process. It has been directly correlated to many difficulties after surgeries in either slowing healing or causing problems for the skin like necrosis. Sometimes in surgeries or treatments, skin grafts or flaps are used. A smoker who needs one of these has an increased chance of necrosis. After reviewing a large number of flaps, it was concluded that patients who smoked at least 1 pack of cigarettes a day had experienced necrosis three times more than nonsmokers while patients smoking at least two packs of cigarettes every day experienced SIX TIMES more than nonsmoking patients. The article notes that there are many wound-related difficulties with smokers like vasoconstriction, prothrombotic effects, and altered wound inflammation.

The relationship between smoking cigarettes and wrinkles has been apparent for quite some time and could easily be cause to great distress with tobacco users. In today’s reality, getting wrinkles is of a greater matter to quit than developing lung cancer, believe it or not! The article says, “In 1985, the clinical features of a ‘smoker’s face’ were described including prominent facial wrinkles, prominence of underlying bony contours, atrophic skin, and plethoric, slightly orange, purple, or red complexion.”

Oral Squamous Cell Carcinoma has been linked to cigarette smoking. A handful of hair and nail disorders has also been related to tobacco, such as, smoker’s nails, quitter’s nail, androgenetic alopecia, premature grey hair, and smoker’s mustache. Tobacco use was shown to play a big role with developing active hand eczema.

Although there are many known cancer causing chemicals in tobacco, there still is no direct association between smoking and skin cancers. More research needs to be performed to really look at the direct role of tobacco use and developing a skin cancer.

Overall, multiple studies conducted did not show an increase or any correlation between smoking cigarettes and squamous cell carcinoma, basal cell carcinoma, or melanoma. That being said, skin is not in the clear from effects of cigarette smoke. 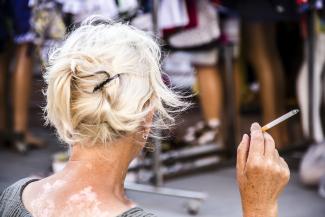